So far in our campaign of Dux Britannarium the Saxons have raided 2 times and 1 time uncontested after a decimating victory over a border patrol.

The Saxons were to take 3 bases of bacon loot from edge A to edge B – the long way across the board.

I got 1d3 initial moves before the Romans arrived. That meant 1 in my case. Most of my units got 11 inches in on the board and the piggies also got a good start. 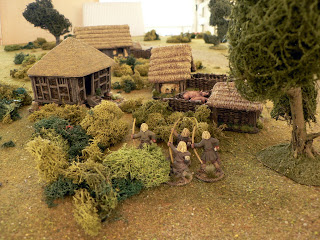 Janner rolled to see where his forces would enter. I’d gambled and put half my force in the middle of the table and the other half on just one side. Of course he rolled the side which I hadn’t put anything on. So I thought I’d send my skirmishes in their direction and harass him.

He rolled that just 1 group would arrive.. and it was his skirmishers. 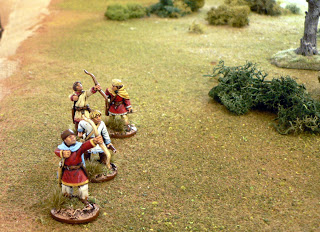 He let the go forward 16” to the edge of a building.

I find skirmishers to be of little value in Dux… so I wasn’t overly worried.

The rules governing the animals stated that if I rolled a double for movement they’d deviate 6” from the path they’re headed. Now that is a very rubbery way to put it and this was probably the single most important move of the game, but being a pythagorean disciple myself I thought that going their full move in a 45 degree direction would be what happened.

As with everything in Dux it doesn’t really say how you should do.. anyway! I chose the option that made the most sense to me and was worse for myself of the ones I could think of.

My lord and his elites were  still slogging forward. As with everything in Dux movement is completely random although of course there are medians and so on. Anyway my lord was getting himself well outside statistical bounderies and a long way away from the piggies he was protecting. (I’m referring to the objectives of course… not his force)

Then the miserable enemy archers fired a deadly spread of arrows killing two of my elites! In one go! That hasn’t happened before. In fact I haven’t looked at skirmishers as anything worthwhile until now. Let’s go back and review the ‘I find that skirmishers have little value in Dux’ thing….. Yikes! 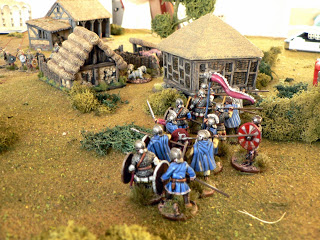 OK, so now the bulk of the Romano British forces started arriving. A fairly simple thing in the rules turns out to be completely important and hard to figure out how works: How does troops enter the table. As with everything these things can be discussed peacefully and thoroughly before a game. But once you’re in the thick of it it always becomes a bit tense (especially with ego’s like me and janner) because you’re looking at just ONE sitution in which your ruling will affect the ongoing battle.

Basically we decided that troops entering the board counts as having moved (makes sense.. right) and the leader counts as having used 1 pt to make them all enter. That way you can’t enter a block of 3 groups and march them all 18” inches in one go with a level 2 leader.

Anyway! Rules aside, things were already seeming to go horribly wrong for the Saxons. The piggies had derailed into a pigsty (maybe they recognised some friends or Romans) and I was fearing that it would be nigh impossible to get them out again! 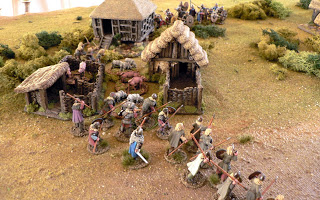 My solution to the muddle was to assign the archers to the pigs. In retrospect this sees a bit dodgy to me, after all archers are harder to hit and have a lot of activations in the deck (Missiles card, leaders, special fate card) and they’re not a fighting body strictly speaking. I don’t know what the scale of Dux is actually… maybe 1 man is 1 man. In that case it seems OK. No matter what, in our game, the archers were now herding along the feeble piggies and sheep. 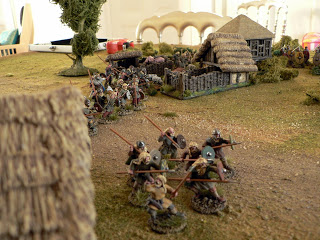 More Romans turned up for the party. Levy boosted by their Lord and a Champion. Nasty unit once it gets into shield wall.

I was faced with a decision – run or make a speed bump. I chose the latter.

I formed the two groups of Saxons in to a formation and told the archers to leg it with the prize.

I felt confident that my superior troops would destroy the romans fairly easily. One important note to understanding that is that I thought Shield Wall worked completely different to what it actually does. I thought it took off the first kill for the first round of combat (nice but not everything) but in fact it takes off the first kill on each group each combat! It makes good sense, otherwise shield wall would be worse the more units that joins a formation… so I guess I was just hopeful.

I managed to charge. The rules are pretty open about charging. If two models from each side make contact you arrange both formations in close combat. 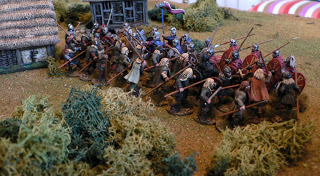 I had played Aggressive Charge giving my soldiers +1 to hit stuff (3+ to hit) but Janner played Shield Wall Braces which gives me -1, so I wound up at 4+ … I scored a lot of kills but the division on the Shield Wall made it dwindle to nothing and the Saxons took a beating. 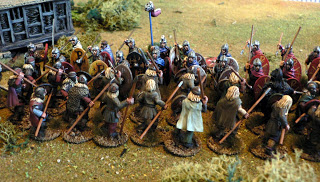 In the end I managed to sneak off with 2 bases of live stock, which made me the winner. My losses took me back to 0 in combat resolution but the meta card game took me up to 2 again.

Thought on the game:
We are definitely getting closer to how we want the game to flow. It’s annoying when rules situations arise and needs to be solved in the middle of the game because one side will always gain from it.
Especially in a game like this one where it’s really close and, in fact, almost down to what it says in the rules who wins!
It takes what could have been a really tense and exciting thing and makes it a tense and slightly more frustrating thing.

Also one important point: This game ran for 6 hours!!! I’d rather play for 1,5 hourse and get in 4 games I think. Haha! But it didn’t feel like a long time when playing, so that was good.

I’m looking forward to continuing the campaign and I very much fear the first battle. I simply can’t see what the Saxons should do against a fully buffed shield wall. *shudder* Haha!

Couple of situations we had were:

Thoughts on the rules:
I don’t find the answers to many of these issues in the rules. The way I’ve gamed Too Fat Lardies in the past has always been to look at the situation and go ‘what actually makes sense here’ and then not care what the rules state. That requires knowledge of the period and not the rules of course. With regards to Dux I have little knowledge of the period and can only rely on the rules. Without a games master that seems very hard to me though.

I think the setting is enjoyable and I think the size of the game is good. But a lot of the time I think the rules are a bit clumsy. I like the randomness of activation and that of the movement as well. I hope we’ll get better at looking at it historically instead of sticking our noses in the rule book. It’s just not that kind of game.

My thoughts, when reading about how people on different forums want to use these rules for just about everything including Lord of The Rings, are:

No… not like that. It’s the other way around. You ought use Lord of The Rings for this…. 😉

But as said  – still looking to play more games of it.