Third part of my ongoing 2nd edition 40k campaign with my Orks at center stage. After the harrowing beating that they took in part I Skrodinga (who had by now recovered from the lascannon disaster at Hive Underhill) decided it was time to exact revenge on the Dark Angels who had whooped his arse.

To be frank Skrodinga was not acting on his own. A pair of new found ‘friends’ or ‘allies’ had joined his force and they seemed quit eager by the prospect of getting to deliver the axe to the Dark Angels. Skrodinga didn’t really know what to think of them, but their mega armour seemed impressive and they had a lot of snazzy custom gear. So he guessed they could tag along for the raid. Although only if they kept their yap shut proper about the whole thing.

Again this was a 1k game. I decided to choose units that were capable of either speed, stealth or neither. So I had a mob of kommandoes with a kaptin, a wartrakk, a mega armour warboss and lastly a dreadnought (can’t do without!)

I deployed my kommandoes hidden… or at least out of sight of the enemy! They stood around a while saying ‘sssshhhh’ 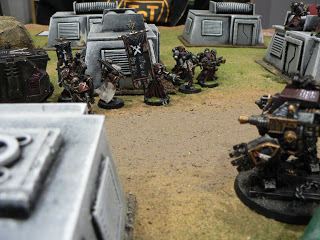 The space marines were unaware, but still on guard. Always suspicious and secretive.

– As can be seen the boyz were making a real good job at deploying and hiding. A bullet proof plan!

The marine units were all on overwatch. Sneaky gitz.

The scouts initiative value allowed them to autospot the orks in turn 1… whooops! Major flaw in plan.

The orks trying to think really quick and smart about what to do next, and then started running around firing their guns. The Ork art of stealth.

THe scouts found the fire just a little too hot and ran off. By now several orks and scouts had bit the dust.

The marine leader wanted to show his mean how to hit the nail with the hammer and promptly jammed has plasma gun.

All of the sudden a group of nasty buggers materialized!!! They were Chaos Space Marine Terminators. Or Snazzy Gitz as Skrodinga called them. What on earth had the deranged ork warlord brought upon the Dark Angels now?!

The appearance of the new enemy made the Dark Angels relocate quickly.

Out of the blue a wartrakk came roaring with guns blazing! Three Marines took a bullet and hit the dirt. 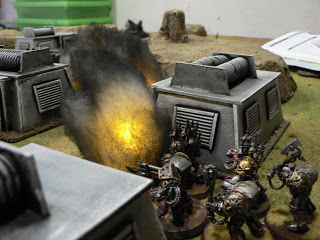 The terminators advanced behind a blistering blaze of heavy flamer fire! 3 marines more succumbed to the enveloping flames.

Suddenly Frede got the idea that ramming the few Kommandoes that were left was a good idea. Neither of us had any idea how it worked though…

One of the orks got splattered all over the rhino’s front but the three other boys sidestepped swiftly.

Meanwhile a mexican shoot out of sorts was buildings up between the to metal monsters on main street.

Who would still be standing in the end?

The tumble weeds were flowing past..

The suddenly the assault cannon roared and took off a leg of the Ork dreadnought. 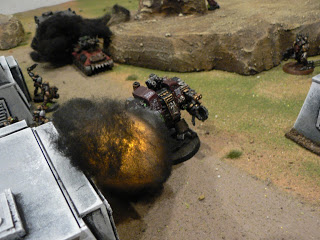 Not quite dead, the grot in the dread fired the lascannon and took of the assault cannon! 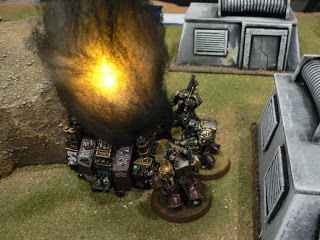 The furious dreadnought rampaged in to close assault with the terminators but three powerfist were 2 too many. 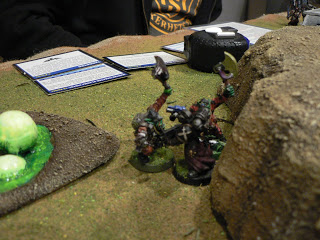 Lastly the kommandoes clubbed the last marine to death. Victory was Ork. Or Chaos?!

As a last by here’s a film where you actually see the fire markers by Frede in action: