The Evil That Robots Do

Design28, a company that is now gone, released these amazing automatons for their VSF line in the late naughties. The figures are now being produced by Black Pyramid Gaming.

I tried to think of an interesting way to paint them, not involving bronze/brass. It seems to me that most people prefer bronze or brass for their automatons. At least in VSF.

In the end I settled on an old recipe I used when painting the tracks of armoured vehicles:

All of it overbrushing of course. No fiddly going on… only around the visor.  That got a dark red, red, orange, yellow treatment. I then highlightet the edges of the visor with metal again.

I also managed to fit in another old Design28 miniature. The Mycroft Holmes automaton. I’m of course going to rename it for my games. 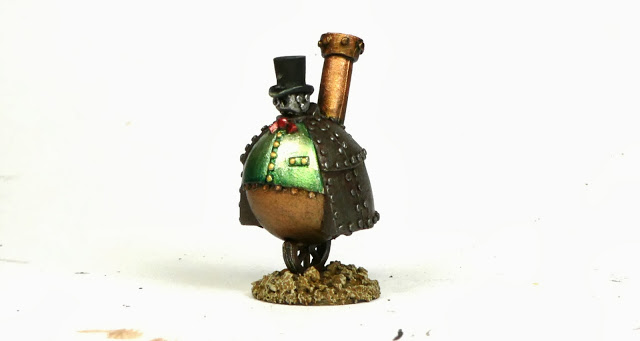 Well, that’s all for now. I’ve ordered the rest of the figures I didn’t have already from Black Pyramid now. This will leave me with an army of Iron Men… which I never planned for! Now what to do with them?