A few more bits for the Scavenge, Skirmish, Survive game that I’m planning. Some of the figures are actual corpse markers and some are actually zombies from Cold War miniatures. 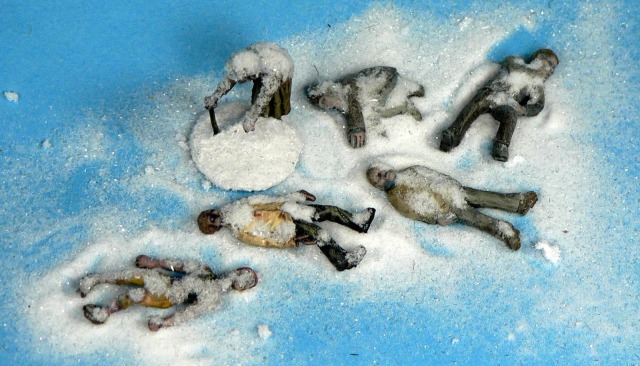 I thought zombies would do just fine as corpses though.

I also stuck in a thing from the outer stars…. In H.P. Lovecraft’s At The Mountains of Madness there’s this thing called a shoggoth. Weird sort of worker bee for an alien race. Anyways the Lovecraft story is set in a snowy environment as well, so I thought I might paint it up while I was doing snow anyway.

I have not dedicated a lot of time to painting or building since Horisont V but I’ve begun doing the walls for my SSS buildings. I’m still in limbo about whether to do an actual board (or boards) or another gaming mat. I might go with boards due to the snow, which requires quite a layer to look good.