Avanti Spumanti! Fighting The Italians In The Desert.

I have been painting a few British desert war troops over the past few months and I have been looking forward to getting them in action.After getting my grubby little hands on I Ain’t Been Shot, Mum! III from Two Fat Lardies it finally happened.
I must say that IABSM III is quite an improvement over the game I played in 2006-2007. The rules have been streamlined, there are force lists, scenarios and everything included and it even looks pretty. Gone is the pamphlet like editing and arrived has a proffesionally cut piece with graphics and all. If it weren’t for the fact that I still print my books/PDF’s, as I hate using iPads etc. it would be all great… but the heavily colourful pages put a bit off strain on the printer. 😀
Anyways, the daring British desert troopers would go up against the Forza Italia commanded and painted by Steen. Steen has been nudging me about when I got my British finished for quite some time, as it turned out I was a lot slower than hi.m… In the two years or so since we started the project he’s managed to paint several companies while I’ve only just started.
Now Steen and I have played quite a bit of IABSM in the past and it has always been quite a joyful experience. We are both light on rules and enjoy a good mash up more than bogging down in the punctuation of particular rule and the impact said punctuation would have on the way a game plays.
We decided to try out the ‘Hasty Defense’ scenario straight out of the book. In this scenario the defenders (the British) get two platoons of defenders and will later be reinforced with an additional three platoons. The attackers get four platoons of their choice to quickly advance and knock out the initial defense. It seemed like a nice suitable scenario.

I chose the following:

On paper at least it would seem that the Italians had the edge initially. Just as it should be when attacking. Now added to this is the fact that the Italians get quite a few ‘penalties’ card wise. Their leaders are hesitant, their troops have poor fire discipline and ammo shortage and breakdowns are the order of the day. 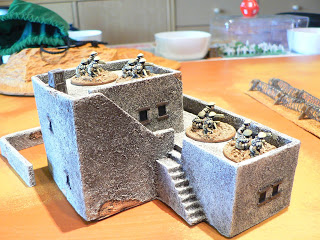 I set up the MMGs on the left side of the British control zone and hoped that they could occupy whatever Steen would throw at them until reinforcements would arrive. 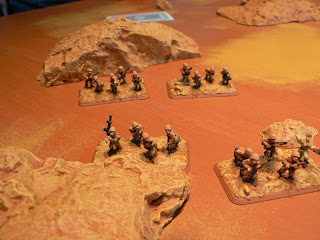 But actually I had more luck than I could have hoped for. Almost immediately the Poor Fire Discipline card came into play and Steen rolled a 2, meaning that the very eager Italians started firing their guns prematurely, thus revealing their position while they were making their way across open ground right in front of my MMGs!  Honestly the timing could have been better/worse. 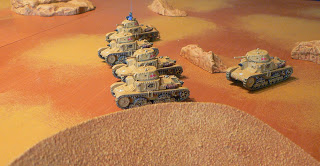 At the other end of the board all the Italian armoured might rolled forwards. We agreed that whenever armour/vehicles started moving they woud automatically reveal themselves. After all vast plumes of sand and dust would follow the noise of the machines… leaving little doubt as to what was coming over the horizon.

My Humbers were trying to fulfill their scouting role but it proved quite difficult. In fact they only managed to get out the defenses before the M41s were shooting them!

I quickly sent my Honeys to assist the Humbers and let them get back to safety. The ensuing pissing contest between the tanks resembled a pillow fight more than an actual battle… the hits were many but the measly guns of this era were incapable of making anything but dents.

The Humbers managed to get back in to cover unscathed.

The Italian commander put his platoon on ‘Hunt’ orders which meant that they would advance and shoot with +1 to hit every turn. After more than 20 twenty exchanges the score was 1-0 to the British.

The reinforcements finally started arriving. This completely turned the battle around for the British. The control zone was more or less unprotected but the arrival of the Indians meant that there was still a contest.

But the Indians managed more than to contest an area.. in fact they caught a platoon of Italians flatfooted in the open ground where they had been moving on a Blind marker.

The following firefight was not pretty. The Indians had superb cover and were unharmed. A freak luck of cards meant that the British were getting their cards before the Italians for several turns in a row. So effectively the Italian platoon was marooned in the open and being shot apart.

The Indian were exploiting the cover.

I think I realised that the battle was won at this point, so I started trying stuff just to see how the new rules worked. Therefore I launched an assault against the pulped Italians with one Indian section. Three rounds of fighting were fought before the Italians (two sections were within 4”) were beaten back. I am not sure if we handled the close combat as intended, but anyway – I think it worked quite well.

No Italians ever set foot within the walls of the compounds… 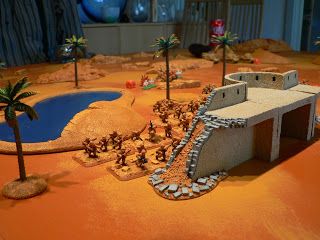 This was the closest they ever got. Testament to the British discipline and superior skills. 😀