Tales from Kenwah – Scenario 4 – Side Quest: The Dark Well

While the story of Juhanni the Cat have been told other chronicles we would be wise to not forget what happened to The Brothers of Void.

Lit by the holy high the brothers have rediscovered their gist and the remaining drug spewing troops have decided to make a huge sacrifice for the Nothingness – the local water supply and sanitation plant must be filled with ‘Green Insanity’ as one of the preferred psychofarmica is called. It will without a doubt require great pains and the loss of life, but it is worth it.

The supply is guarded by a group of has-been soldiers that are mostly concerned with playing cards and drinking amasec.

Green Insanity: 5 rations of Green Insanity is distributed among the brothers. At least two rations is necessary to get the concentration of drugs high enough in the supply plant to a well functioning level. To put a dose in the water supply a figure must spend at least one turn in base contact with the terrain piece.

Robot: A grumpy old imperial robot accompanies the soldiers. It goes by the name of Old Red. The robot is programmed before the start of the game with a designated route. As the robot is very old it will not immediately recognize a threat. Roll an intelligence test for the robot every time an enemy in it’s fire arc commits a hostile action (GM’s discretion). If the test is successful Old Red decides to engage. Due to it’s age, Old Red is not functioning as properly anymore. It counts as having a BS of only 2, and when firing it’s auto cannon it has a BS of 1.

Scorpions: The area is constantly under attack by giant scorpions. Normally the soldiers can hold them off while drinking and playing cards… but once the shit hits the fan the scorpions stand a real chance of entering the camp. Use the same rules as were used in scenario 3.

Who Wins? If the Brothers manage to poison the supply they win immediately. If they are routed before their goal is achieved they lose. 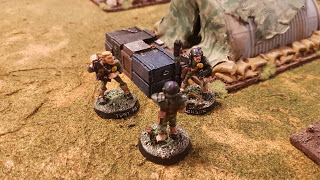 A real close game of Black Zack was going on between Roy, Duck and Dayum. 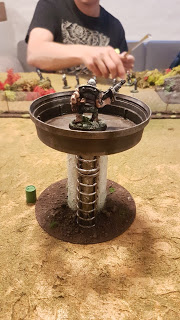 The Ogre, Dorf, was on a look out as usual. His eagerness to soldier easily accounted for his lack of intelligence.

Bones the squat and Old Red were busy moving the latest canned foods and beverages around the camp. 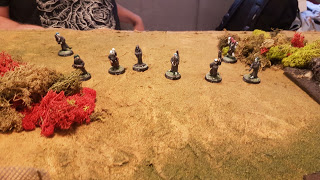 The Brothers of The Void approaches the blissfully ignorant camp. 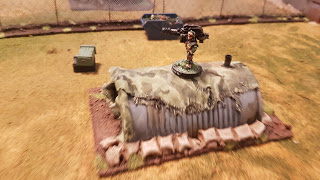 Being to drunk to fight, Nate Hushpart the heavy weapon trooper was asleep in his nissenhut.

The commander, Commander Vyper, was commanding things from behind a desk with a monitor full of tits… a few more minutes of commanding would surely result in liquid results.

Dorf, while being very faithful and soldierific was quite short sighted… and couldn’t really make out the distant shapes in the horizon. But he moved to the side and yelled something along the lines of ‘bogeys incoming!’ 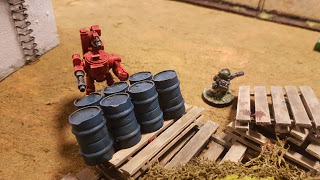 As the beverages where in place Bones pushed the button to let Old Red continue on his guard duties.

The guardmen scrambled from their card game. All but trooper Dayum that is… he stayed behind to secure all the winnings.

The commotion even got the Commander Vyper out of his titillation.

Now things started to escalate. The narcotically deranged brothers started shooting at will… or illusion of the same. Not hitting much.

Old Red and Bones started trotting towards the intruders. Despite several attempts at calculating the danger level and hostility of the intruders Old Reds algorithm decided that nothing much was about. 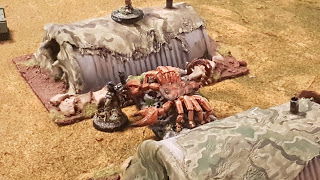 During all fuzz a giant scorpion had snuck up on the camp. Trooper Roy discovered this in the most unmanly fashion when the scorpion attacked him from behind and turn him inside out.

The Brothers were reigning free in the camp now. Seemingly unstoppable their drug infused bodies kept on running into the compound. 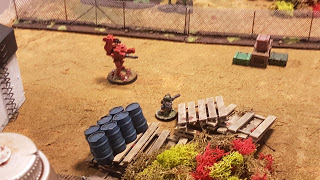 Old Red finally decided that one of the Brothers might be hostile and opened fire… just in case. 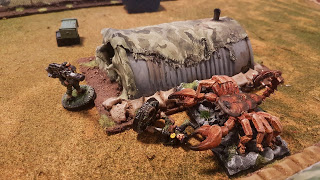 The sounds of trooper Roy being ripped apart was enough to awaken the drunken Nate Hushpart. He went outside in a combined ‘By the Emperor! Holy crap Roy your guts are spilling!’ kind of exclamation.

After finishing Trooper Roy the scorpion went on to the next trooper. Dorf the ogre decided that the Scorpion would be worth his time and started tamping it with his weapons and fists. 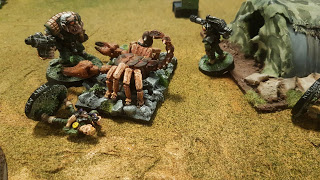 Nate Hushpart started firing in another direction with his lascannon

At the supply plant Commander Vyper was the only obstacle for the approaching Brothers. 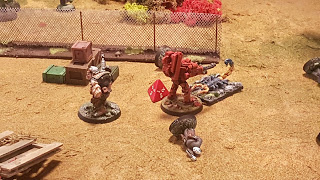 More scorpions started arriving and Old Red decided that they might be considered hostile too. After finishing off a brother it started hammering a scorpion. Dorf has managed to escape the giant scorpion while running away.

Trooper Nate Hushpart kept firing at the giant scorpion. Most everyone else were lying dead in the sand…

Trooper Dayum were sticking to his winnings… not keen on fighting one bit.

The giant scorpion, a bit of a robot in its own right, decided to attack Old Red. Old Red in return, deemed that the giant scorpion might be hostile and worth attacking too.

Commander Vyper faced the lone brother – the brother opted to finish him off before going over the fence.

A pot shot served him right and the brother was killed.
This ended the spree of the brothers. They were all incapacitated… but so were the guardsmen. The quiet life of the deserted desert camp was no more. Commander Vyper stared blankly into the horison as he lamented the amount of paperwork he would now have to commit to the Imperial liaison at the next way station…. and surely they would look into the numbers, the food, the beverage and all the rest. His life was doomed. He smiled. And looked into the lasgun.