Putting the RIOT back in chariot! (ATOTGB Undead 1)

I hereby present the first unit for my A Tale Of Two Gaming Buddies Undead Army.
In the ancient history of our world chariots were made popular by fashionistas like the Egyptians and bearded hipsters like the Assyrians. They sported hot wheels carried forward by frothing horses under the beating sun. The girls went wild!  The chariots,  however,  proved to have considerable drawbacks. For instance they mainly worked on 100% flat ground… small bumps and stones could really took the day for a charioteer… and with later innovations like the riding horse, the saddle and the good bow, the Assyrian hipster mobile quickly became obsolete and the cool dudes were left with long faces and long beards.
In the glorious Warhammer world,  however,  chariots are eternally relevant!!! What better way to smite your enemy than to drive into him with scythed wheels screaming at the top of your lungs? 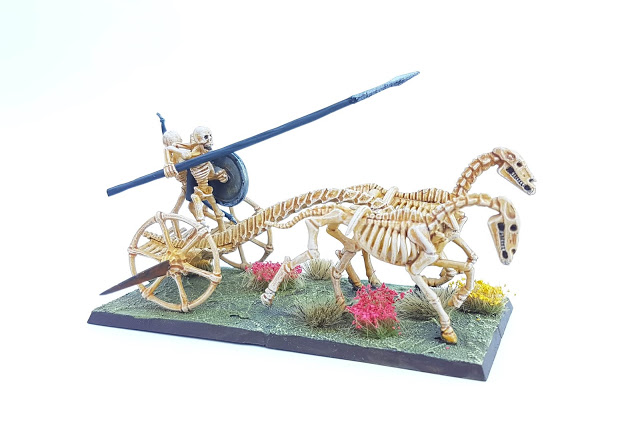 I have painted two chariots for my force.  Both are remnants of the great force of the mummy Lord Tut Ankh Amuck. Now they follow the unbending will of Ulrich Kemler and as he gathers his forces the charioteers have awakened from their slumber next to their former lord. 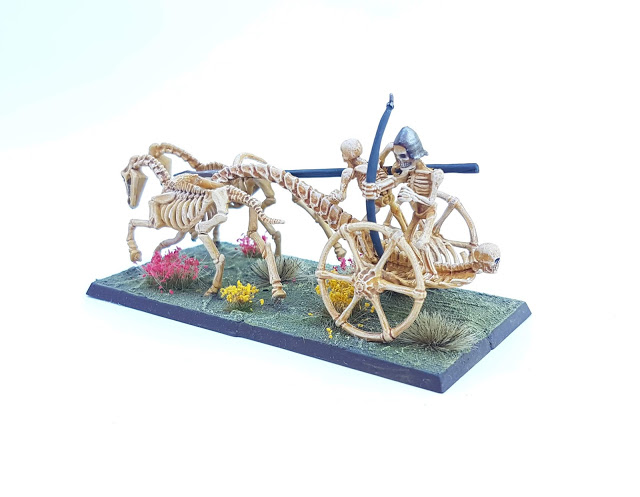 In undeath the charioteers ride to set the world ablaze and nothing soothes their empty souls more than the sight of the flaming skulls of their enemies as they race across the landscapes.

Painting wise I was inspired by the John Blanche artwork here: 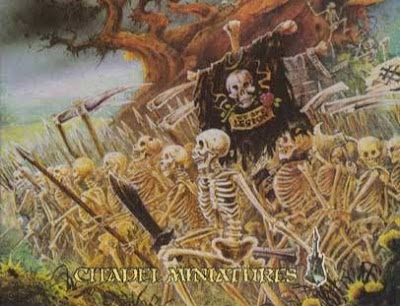 I love the bone coloured skeletons in the image. I think it is proper old school.  I also don’t want to go overboard with rust and grime. These are magical beings – they don’t have to be rusty.